So a lot has happened this week in our little infertile world.  Brandon went to Chicago on Tuesday to freeze a sample.  He explained it to be as awkward as I imagined it would be and then some (leather couch, TV on the wall, doorbell to ring when your “finished”).  I was dying when he was describing everything from the uber drive there to the nurse coming to collect his sample fully gowned up.  Finally, he’s the one going through a horrifying experience! Poor guy but he’s such a sport through it all.

You know how much it cost to freeze sperm? 500 dolla! Can’t we just put them in an ice cube tray in our freezer for free?? On a serious note I’m happy we decided to freeze a back-up.  I’m reading a book about a a couple who went through IVF and the guy couldn’t produce a sample the day of his wife’s egg retrieval. 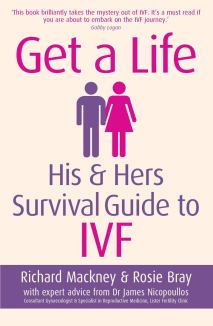 So as hours and hours passed his wife’s poor eggs were dying.  She went through a month of IVF hell and then her dang husband couldn’t even keep up his end of the bargain. I think it’d take everything in me to not kill Brandon if that happened.  Hence, the freezing of the sperm.  I don’t wanna have to kill him that’d just be inconvenient for everyone.  We decided at our consultation that we were going to freeze some spermies and reading this chapter just solidified the decision.  500 dollars didn’t sound so bad after all.  A fresh sample is the best and we’ll still shoot for one the day of my egg retrieval (no pun intended) but in cases like these you gotta have a back-up.  It’s just not worth it to take that risk.

Also, I really would recommend this book to anyone about to go through IVF or going through it now.  It gives a really cool perspective from both the man and woman’s side.

The next big thing is my meds came yesterday! I kept saying I wasn’t going to believe our insurance was covering them until I had them in my hand.
Well our bank account isn’t cleared out and the medications are sitting on our table (some are also in the fridge next to some beer and cheese).  We spent a little over $200 on thousands and thousands of dollars of medications.  I think this is a good time to mention how thankful I am.  When it comes to insurance coverage, I realize how fortunate we are.  I am not taking any of it for granted.  Yes we were dealt a shitty hand when we became an IVF couple in our 20’s but we were also dealt a really good hand with our insurance.  I know there are plenty of couples out there who have little to no coverage for any of this so believe me I know how lucky we are.

Did I mention how big the box was and how many meds were in it? Talk about putting things into perspective. 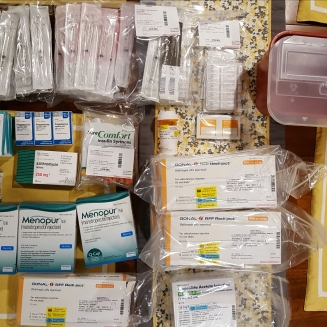 As scary as all those medications look I cannot wait to get started.  Like I said before, each medication is just another check off our list to getting closer to our ultimate goal.  I’m ready to break open these boxes.  I’m ready for the pokes and bruises.  I’m at a really good place with all of this.  I hope I can keep up this positive attitude once all the hormones start getting injected into me!

The final thing to talk about this week was my mock embryo transfer/saline sonohysterogram.  I was not looking forward to this cuz I was assuming it would be like the HSG procedure I had done back in September which wasn’t THAT bad but also wasn’t that good.  I was ready for it to be uncomfortable and painful.  I stopped at Walgreen’s on the way there to get some Ibuprofen.  I took 3 in preparation.  When the nurse took me in the room she asked me if I ever had this procedure done or if I knew anything about it.  I told her I had an HSG and she responded with “this is nothing like that.”  Well that was reassuring.  She told me I may experience some slight discomfort but it won’t last long.  The doctor and nurse performed it together – my doc passed the catheter through my cervix and into my uterus and the nurse was in charge of the vaginal probe.  I fixated my eyes on the ceiling and let my body relax and then after what felt like a minute it was over.  I couldn’t believe it.  “That’s it?” I asked the doctor. It was in fact over and I didn’t feel a thing.  I let out a big sigh and told them that the HSG was way worse! My doctor responded with a “told ya so!”

I looked over at the ultrasound machine to see the pictures they took not really knowing what I was looking at.  I asked if that was my uterus on the screen.  Doc responded – yep you got a textbook uterus, things look great.

Awww yeah, did ya hear that – a textbook uterus. 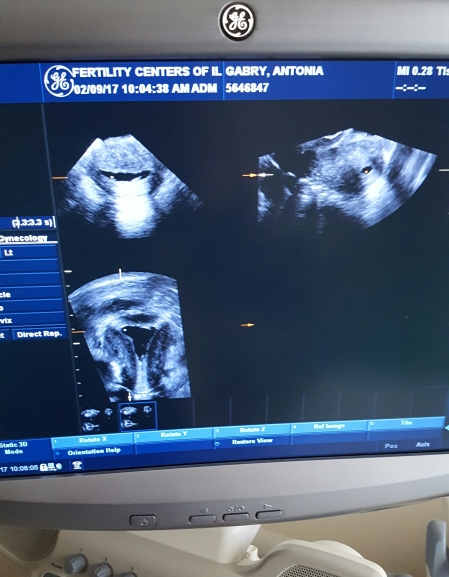 He assured me that things should go smoothly the day of the embryo transfer!

My nurse called later in the day to check how everything went and tell me the next step is blood work and ultrasound on February 16th to see if we can start the Lupron injections.  We also have to sign some paperwork saying we haven’t and won’t be traveling to any Zika areas in the coming months.  They will not treat us if we do.

Fine with us.  We have no plans to do so.

Anyways, did I mention I have a perfect uterus?